Dave and Jenny Rix invited us to join them for a week at Sobhengu timeshare. Mike and Jane Roseblade and Cecil and Jenny Fenwick also came along.

Sobhengu is located at the tip of the Nibela peninsular in the Isimangaliso Wetland Park.

It is connected to the Nibela Lake Lodge by boardwalks and along a 4×4 track. Our Chalet had a commanding view over the lake and was set in pristine sand forest. It consisted of four en suite bedrooms, a huge lounge, kitchen, a large outdoor deck overlooking the lake and a boma braai area.

We were well looked after by the always smiling and helpful staff.

Much of our time was spent walking the trails in the forest looking for bird parties. Often we heard special species without being able to find them – though we did get lucky with some. Green Malkoha, Scaly-throated Honeyguide, Gorgeous, Grey-headed and Orange-breasted Bushshrikes, Green and Pink-throated Twinspots, Narina Trogon, African Broadbill, Eastern Nicator, Fiery-necked Nightjar, Bearded and Brown Scrub-Robins, White-throated Robin-Chats, Black Sparrowhawk, African Wood-Owl all made their presences known – most unsighted. The Twinspots, Trogon, Nicator, the Robins and Sparrowhawk were the exceptions.

The trails were not only through the forest but also along the water’s edge and at the furthermost point from our cottage there were fossils to be found close to the beach.

Later on, as the sun warmed things up, butterflies were everywhere. Perhaps someone will have a go at naming #2, #24 and #27 captured in photographs at the end?

And there were flowers to catch our attention too.

And the occasional forest magic.

Of course there were other beasties too which Jane had a habit of walking into. Fortunately her keen eyes did not let her down.

Mike and Jane took a diversion to have a not-so-quick game of chess while some of us watched soaking up the sun on a coolish morning.

Then of course there is the local wetland area about 15 kms from the Nibela Gate. Lucky, our guide took us there. Great flat wetland area and a must for any birders.

There were numerous waders to be seen in and around the water’s edge including Common and Curlew Sandpipers (unusual for the time of year) Pied Avocets, Kittlitz’s Plovers, Little Stints, Common Greenshank to name a few.

However our target was Longclaws – and we saw all three of them. The Rosy-throated being the most prominent and obliging. We had wonderful sightings of both males and females. And there were Pale-crowned Cisticolas calling and displaying too.

On the way to Sobhengu we took a short detour into Hluhluwe Game Reserve and had some good sightings of Rhinos, Buffaloes, Elephant and Lions as well as many birds. The most notable of which was the Black-crowned Tchagra – singing and on display.

This was not to be our only visit to Hluhluwe Game Park.

News came through on the Sunday from Trevor Hardaker that a Striped Crake had been seen at Thiyeni Hide. Sally and I decided to try our luck on the Monday and Cecil and Jenny Rix came with us.

Now I cannot remember when this hide was last open – probably a good 10 years ago or more so I was surprised to hear that it was open.

Anyway we head off nice and early. No traffic in the park until we turned off the tar onto the gravel. Disgruntlement in the car as the car in front was, it appeared to be dawdling and some in our party were getting anxious to get there. I was happy cruising along behind.

At the turnoff to the hide, the car in front makes the turn – aha they have come to see the bird too – as I suspected. The walkway to the hide is overgrown and part of the fencing looks as though an elephant has come through. Not only that but the entrance to the walkway is well hidden.

The other couple – (Adrian and Sue as we later learned) were well ahead of us by the time we got to the hide itself. The hide was in dismal shape with layer upon layer of bat pooh underfoot – thankfully less so on the benches.

We sit and wait. Then after five minutes the Striped Crake is seen by Adrian swimming across the water into the reeds on our left. We now know where to focus and eventually the Crake appears and gives us a good sighting before disappearing again. Several more times it appeared briefly and then remained in hiding for several hours until Nicky and Ticky Forbes arrived. We left and they later told us they had great close sightings after waiting patiently for some time.

A Slender Mongoose popped out in the same area as the Striped Crake so we hope he did not have the Crake for supper.

We later heard that the hide was meant to have been closed. If so we were fortunate to have been able to have such a good sighting of the Striped Crake.

Some of the characters at large in the chalet party.

In all we recorded 117 bird species in Sobhengu and the wetland area. Click here to see the list.

Our adventure started while we were at the Sobhengu timeshare on the Nibela Peninsular, Isimangoliso Wetland Park, KZN – very close to Phinda.

We received Trevor Hardaker’s report that a Malagasy Pond Heron had been seen at Mziki in Phinda. We followed Trevor’s reports each day hoping that arrangements would be made with Mziki to see the bird before we headed home.

It was only when we got home to Howick that arrangements were made for keen birders to gain access to see the bird.

Sally and I decided to go. We made a booking for the Wednesday afternoon game drive. Then we called several friends to see if they wanted to join us to make up the numbers. We got one taker. So I put out a message on SABirdnet and on the BirdLife Port Natal Facebook page. The phone never stopped ringing and within minutes we had a full vehicle – 7 people in all. Janice and Mike Isom, Nicky and Tiki Forbes, Cecil Fenwick and ourselves.

Yesterday we drove all the way back to Hluhluwe, booked into the Fever Tree Lodge where we planned to spend the night. And then on to Phinda, reaching their gate well early. To get to Mziki was a further 12 kilometres driving through Phinda’s game reserve and slowly enjoying the nature sightings along the way including a White Rhino and baby.

In seems that our party all had the same idea and we all arrived at the Mziki gate at more or less the same time – and hour and a half before the game drive.

Our game drive vehicle was ready for us at 14h00 – Brendon and Johan our guides. We set off for the wetland area where the bird had been seen regularly. We were told that they had had a 100% hit rate so far. I think we were all worried by that statement. 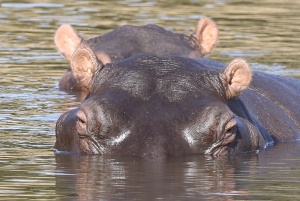 First area – no luck. Round the other side – no luck. To the other end of the wetland – no luck. Process repeated and another area visited – still no luck.

Thought we had a chance in one small pond where there were many African Spoonbills and a couple of Yellow-billed Storks fishing. – no luck.

Despair starting to set in as night drew closer. So one more complete cycle and back to the start – still nothing and now it was time to head back. One final look, and as we start to leave Sally spots the bird right next to us. We all get a brief glimpse. Unfortunately it spots us and flies across to the other side in some deep reeds.

What a lovely sighting of the bird in flight.

Anyway, we drive round to where it went into the reeds and we vaguely spot it at the edge – well camouflaged by reeds of course.

Again it spots us and flies across to the side where we had just come from, changes its mind and lands on a stump in the water.

Great views but poor light for photography, however we manage some shots. It flies to another dead tree kicking off, in no uncertain terms, a Cattle Egret which was roosting and settles there.

It is a bit further away and we suspect that is where it wants to roost so we left it alone and headed back to the cars in the now gloomy light.

At the cars we enjoyed a few drinks and snacks laid on by the Brendon and Johan.

We were all elated and the guides relieved.

Sally was the most popular person amongst us. Well done Sally.