Note that you can double click on the photos to enlarge them.

If you would like me to send you a copy of our bird list – what Sally and I saw and where then click here to email me.

Sally and I recently returned from a nine day trip into Southern Mozambique. We went with Grahame Snow (our guide) of Reach Africa and three others – Pat Nurse, Joan Saggers and Andre Pienaar.

The purpose of the trip was to explore the Limpopo Floodplains; Panda forest and nearby floodplains; and the Bobiane-Unguana thickets. Our goal: to find the specials in each area as well as those birds which we do not see regularly back home.  The two main specials included the Olive-headed Weaver and the Eastern Green Tinkerbird. Because of the time of year we also had our eyes out the Mascerene Martin and Malagasy Pond-Heron. The Eurasian Bittern was another hopeful in the numerous floodplains.

The day before we departed we drove to Johannesburg and stayed overnight in a B&B (My Home in Joburg) close to Grahame’s home. Arriving early we were able to spend a couple of hours in Walter Sisulu Botanic Gardens. 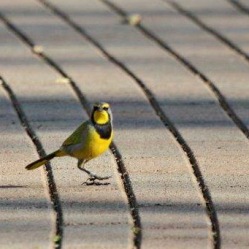 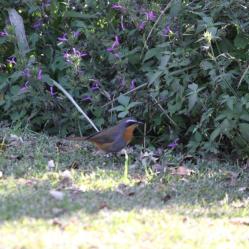 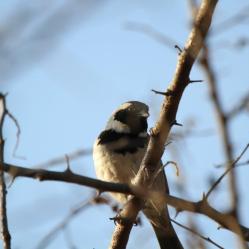 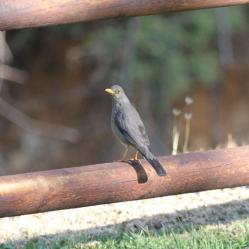 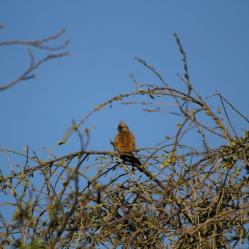 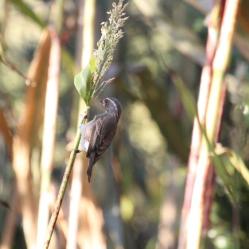 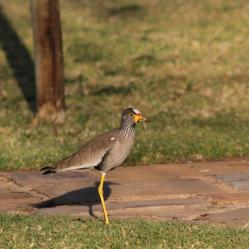 The early start from Johannesburg got us away before rush hour. We reached Komatiport just after midday and got through the border quite quickly – perhaps because it was mid week and out of school holidays.

Instead of travelling via Maputo to our first stopover just north of Xai Xai, Grahame took us north from Moamba towards the small village of Sabie then NE to Magude and then east to join the EN1 and on to Xai Xai. This route is rough in places and mostly gravel all the way. The route is quiet and we were able to bird as we travelled.

Zona Braza 10 kms off the main road 30 kms north of Xai Xai was our overnight stop. We arrived quite late. The accommodation was very pleasant and the food at the restaurant very tasty.

The next morning we were up for an early morning walk around the camp and down to a rather large water-lily covered pan. There were numerous water birds including many African Pygmy-Geese and Southern Pochard. Black-throated Wattle-eye and Brown Scrub-Robin also entertained us.

After breakfast we headed to Morrungulo Bay – our luxury lodge for the next three nights –  north of Inhambane close to Massinga.

Prior to arriving at the lodge we went looking for the Spinetails some 50 kms north of our turnoff for the lodge – near a village called Nhanchengue. Both the Mottled and Bohm’s Spinetails were seen circling the many large baobabs.

This detour was made to secure the first 2 specials of the trip.

The next three mornings the wake-up call was well before the sparrows so that we could arrive at the Bobiane-Unguana thickets by 06h30 – an hour’s drive away.

Some pictures of the habitat in the area:

The Eastern Green Tinkerbird our main goal. We searched 3 or 4 different locations where it had been seen before but had no luck in finding the bird – although we did hear the call once.

Grahame showed us the Eastern Green Tinkerbird’s nest recently found – see pictures. It was the unusual red seeds sticking to the bark which attracted attention to finding the nest. (Read all about this nest in the latest edition of Africa Birds and Birding.)

One morning we were greeted by the call of the East Coast Akalat. We searched in vain and despite it being very close we were unable to spot it. Grahame had heard it in the area on a number of occasions but had never seen it. The following day we tried again and eventually Sally saw it on a low branch in the thickets and I managed to see it as it flew away. None of the others were so lucky unfortunately – a lifer for both Sally and me. Everyone else except Joan had seen it elsewhere.

Several butterflies were seen (and identified by amateurs) including the following:

The habitat destruction here and in Panda Forest has been the subject of an earlier posting – “The Sadness of Mozambique’s Forests” so I will not repeat myself in this report.

Other birds photographed in the area include: 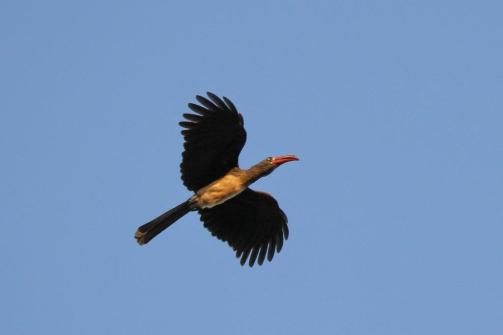 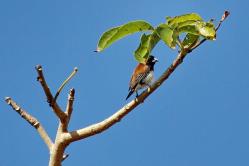 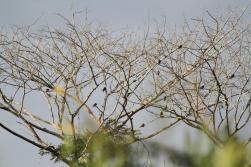 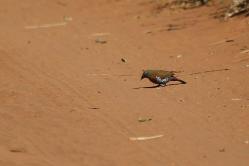 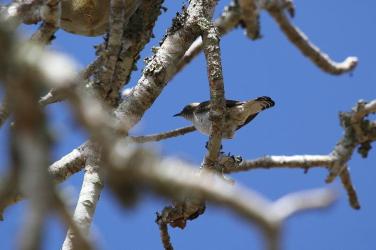 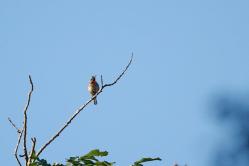 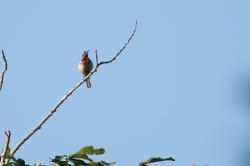 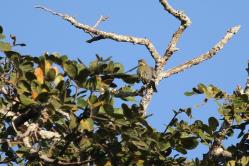 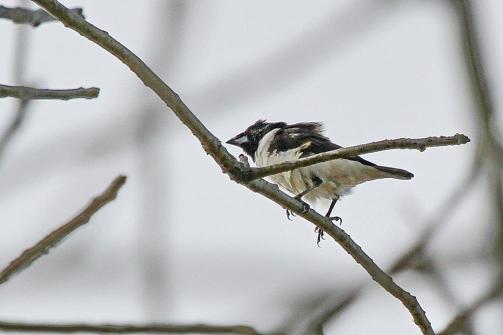 There was one other beautiful bird which a number of us had as a lifer- the Livingstone’s Flycatcher. It was incessantly on the move making it very hard to get a decent photograph. 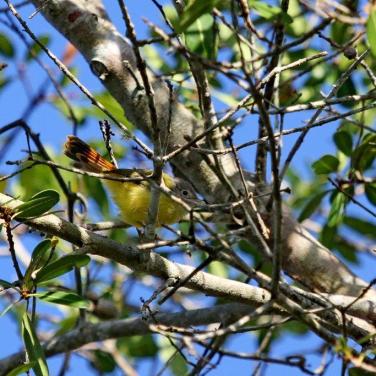 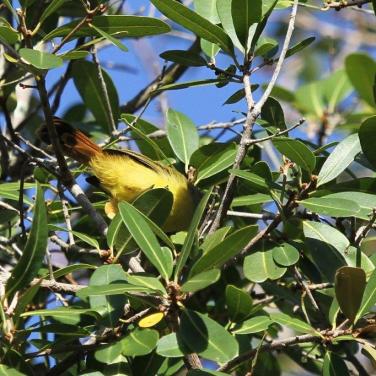 Eventually it was time to move on. Back south to Caju Afrique “close” to Panda for our next three nights. Caju Afrique -where we stayed – is inland from Inharrime off the road to Panda. There are a number of lodges and a couple of full facility campsites – all overlooking the Inharrime River which was very broad at this point and looked like a lake, complete with small dhows and rowing boats 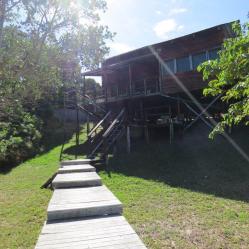 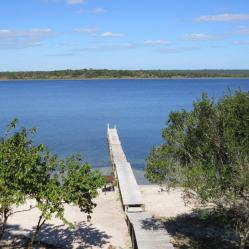 View from the deck

View from the deck.

Habitat around the lodge

On route from Morrungulu we stopped at Chucuque near the ferry across to Inhambane where we were treated to the sight of a flock of Greater Flamingos in the foreground of a passing Dhow with Inhambane as the background. A couple of Pied crows in display and a lovely Scarlet-chested Sunbird entertained us.

The road to the lodge is very colourful – check these photos:

Although the lodge is basic it does have hot water, power when we want it and friendly staff. In fact everyone we met was exceptionally friendly and helpful.

Again each morning it was up early – even earlier on the first day as Panda is almost two hours driving away and we wanted to be there at first light.

We set off into the “forest” and listen out for bird parties. Very soon we hear our first and see White-breasted Cuckooshrikes, White-crested Helmetshrikes, Southern Black Tits all moving fast from one tree to the next. We try to keep up and catch glimpses of the birds as they move through the trees – but no Olive-headed Weaver. 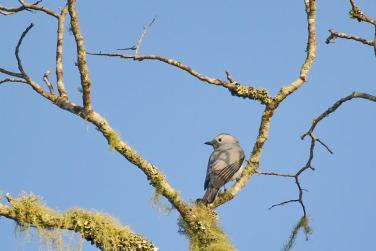 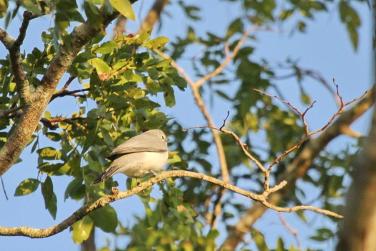 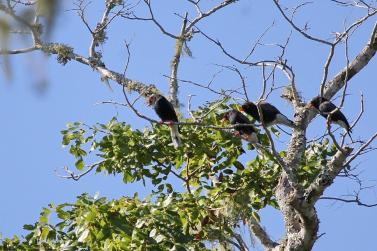 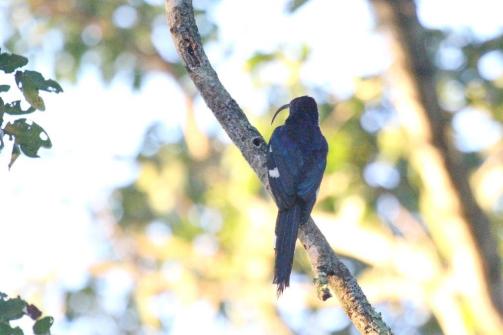 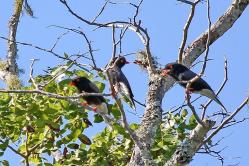 Further into the forest we come across many large open clearings where the trees have been logged out. And, it was on the edge of one such clearing that we find our first pair of Olive-headed Weavers – a male and female. 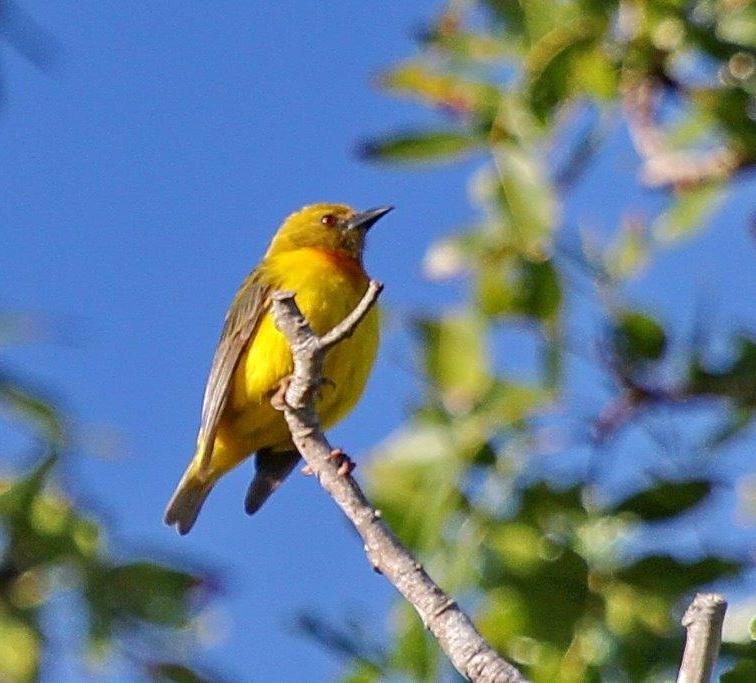 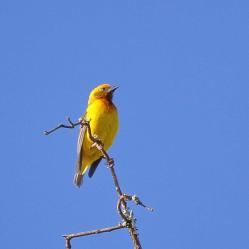 We look out for Chestnut-fronted Helmetshrikes without success but do eventually find a flock of five or six Racket-tailed Rollers. 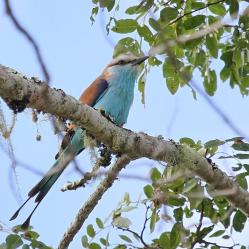 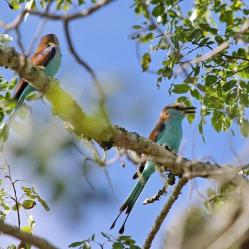 One the way back we notice all the wetland areas we passed by in the early morning and we check out several to return to. Grahame goes waist deep in one place and flushes out Lesser Jacana. 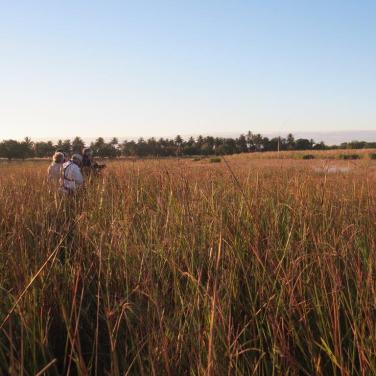 The next morning we head for the most promising wetland area with a view to seeing an Eurasian Bittern. Wet grass and wet feet as we trample through the wetland – Grahame knee high in the water and Andre with the other end of the rope hoping to raise an Eurasian Bittern.

Grahame and Andre wander ever deeper into the wetland and eventually after several hours turn round and head back still dragging the rope between them. We get to the shorter grass plodding back through the wet when suddenly we hear this huge roar as Grahame yells at the top of his voice “Bittern”. Immediate unbelievable response from all of us – we watch this huge bird not more than 50 metres away and flying away from us. We watch as the bird languidly flaps into the middle of the wetland. Another lifer for all of us.

During the course of the day we lunched beside the road next to a clump of woodland – which was teeming with birds.

Birds photographed as we travelled in this area:

Then we headed south once again, through the exceptionally crowded town of Xai Xai to the Honey Pot, our overnight accommodation. We took the opportunity to visit the Limpopo floodplain after dropping off the trailer and before checking in as it was getting late. We returned there early in the morning before departing to Johannesburg.

We were treated to a number of birds we had not seen on the trip including Collared Pratincole, Allen’s Gallinule (lifer for Joan), Fulvous Duck, Goliath Heron, African Sacred and Glossy Ibis, Brown-throated Martin (we tried our best to convert some into Mascerene), Black-crowned night-Heron, Three-banded and Kittlitz’s Plovers, African Spoonbill, Wattled Starlings, Grey-rumped Swallows and Hottentot Teal.

After sunset we had an appearance of many Nightjars which we believe to have been both Square-tailed and Swamp Nightjars.

Finally it was time to head home. So after a quick squizz at the floodplain and a bit of breakfast off we set following our tracks back to Johannesburg.

Seen along the way;

Eventually we arrived well after dark.

It was a fantastic trip with good company and an excellent Guide. Hectic at times but that is birding. Would love to return to find all those specials we dipped on.